Because racism doesn’t exist anymore, right? Well, a Muslim man who was in a traffic mishap in Alaska was able to film a woman who went off on him. She was also involved in the incident. It’s not clear if it was an accident or just a near miss.

The man started with apologizing and calling her “ma’am.” Here’s the exchange:

He made attempts to calm her down, to no avail. He kept telling her to calm down and relax in a courteous way as he profusely apologized. She continued with:

“Well you better open your g-d damn eyes and learn how to drive, you f–king Muslim. You’re a Muslim, aren’t you?” she asked.

The man replied that he’s a Muslim and proud to be one, to which she responded:

I goddamn knew it. You blow up school bus children, you g-d damn son of a n–gger loving atheist b-itch. Get off of me.

When the man asked her “why are you so full of hate?” she started calling him stupid and telling him to get into the road and “let them run over you.”

She then started asking about his family, and he told her that “my mom passed away.” She started laughing and said “right.”

At one point, she got out of her car and started running towards him shouting “I’m gonna g-od damn kill you.” She then returned to her car and sped away as she tried to hit him with her car.

Why do we share these stories and videos? Because racism isn’t dead, and it doesn’t matter who says it is. These stories need to be seen and shared so that we don’t become complacent.

Watch the video below. 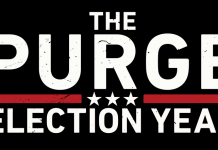