Since 1894, the Mississippi state flag has included the Confederate battle flag in the left-hand corner, or canton. It is the only remaining state flag that still incorporates the Confederate flag in its design. However, it’s possible that may change due to a statement issued by state house speaker Philip Gunn, a Republican. Gunn said that his Christian faith had led him to conclude that the Confederate portion of the flag was “a point of offense that needs to be removed.” He called for “conversations” to start about changing the flag.

Chances are that Gunn was motivated less by his Christian faith than by the massacre in Charleston. For those who missed it, Dylann Roof’s car had a novelty plate on the front featuring the Confederate flag, and numerous pictures have surfaced depicting him with the flag. Regardless of Gunn’s motivation, according to The (Jackson) Clarion-Ledger, he is the first Mississippi Republican known to have called for the removal of the Confederate flag. Like Haley’s speech, Gunn’s statement came 48 hours after the discovery of a horribly racist Website operated by Roof, in which he declared in no uncertain terms that he wanted to start a race war.

Mississippi last tried to change its flag in 2001, on the heels of a 2000 state supreme court ruling that through an oversight by the legislature, Mississippi hadn’t had an official state flag since 1906. While the flag was formally readopted in January 2001, a nonbinding referendum proposing the replacement of the Confederate canton with a blue canton of 20 stars in a circle failed overwhelmingly; 64 percent of voters favored retaining the old flag. While Governor Phil Bryant said on Monday morning that he didn’t expect the legislature to “supersede the will of the people,” it’s hard to believe that opinion hasn’t changed in the last decade–even as Mississippi has gotten a lot redder.

This removal should have been discussed–and enacted–a long time ago. It shouldn’t have taken the actions of a racist thug to start “conversations” about its removal. 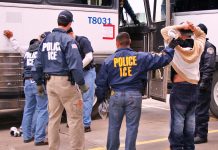 Trump Demands Apology For His Racist Tweets Against Congresswomen

The Lasting Damage The 2020 Census Citizenship Question Could Do (Video)