In what is easily one of the most intense primaries in living memory, both the Democrats and the Republicans are divided parties, with ‘extremists’ on both sides — Bernie Sanders on one side, and Donald Trump on the other. But in a political world that seems driven entirely by polls that change from one day to the next, how do you get a result that matters?

Yep — betting on the U.S. Presidential race is illegal in the U.S., but it sure happens overseas, and international bookies keep incredibly close track of shifting political and social circumstances. Enough so that they have a 91% success rate over the past several cycles.

The difference between a pollster and a bookie is simple, claims a former claims manager from Intrade, a politics-specific bookie from Ireland: “The polls ask who you’re going to vote for — a question that requires an emotional response. [A bookie] asks who you think will win — a rational question that requires someone to look at the facts and real world events, such as polls, debates, speeches, gaffes, scandals and crises. One of these facts is the Electoral College, which isn’t accounted for in polls.”

So who are the bookies banking on for the Presidential election?

Hillary Clinton Is More Than Twice as Likely as Trump (or anyone else) To Be President.

Now, obviously since these are bookies, everything they do is given in terms of odds, so let’s get more specific.

These odds are from PredictWise, a research project that gathers information from bookies, prediction markets, and polls, weights them appropriately, and gives the weighted results.

If it seems to you like a 48% chance to have a Republican president (and/or a 24% chance that Donald Trump could become the next President of the United States) is a stupidly frightening prospect, the answer is simple: VOTE.

If it seems to you like a 0.93% chance to have a Socialist Democrat president is far too slim given the amount of visceral contempt you have for the political system in general, the answer is simple: VOTE. AND GET EVERYONE YOU KNOW TO VOTE, TOO.

The bookies will tell you, it doesn’t take much to change these odds completely — a single gaffe or leaked fact has killed more than one political career. The primaries are only just beginning, and there’s still plenty of time for meaningful change. But if you want that change, it has to start in hundreds of thousands of homes all over the country, and it has to spread fast, and it has to happen right the hell now, before the system does what it does best and locks in the person who is going to most powerfully support the status quo. 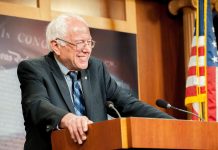