Three weeks ago, three Florida teens — 16-year-old Dominique Battle, 15-year-old Ashaunti Butler, and 15-year-old Laniya Miller — stole a car, evaded police, and crashed that car into a pond. The car quickly filled up with water and sank, killing the three girls. Police were at the scene and according to Pinellas County Sheriff Bob Gualtieri, two deputies attempted to save the girls from the vehicle, but were unable due to the depth of the pond and muck and grass he described as “almost like a carpet.”

As it turns out, that was a bald-faced lie.

Dashboard video from the night of the accident actually shows the negligent officers doing nothing to save the girls. Despite the pond’s conditions not being optimal for a rescue mission, that does not excuse these officers’ lack of trying. The point is not to let the suspects die.

Worse than that, Sheriff Gualtieri lied about the incident. It’s pretty sketchy for a man of the law to deliberately mislead the public to cover the the department’s ass and the asses of these negligent officers, especially at a time when actions taken by police around the nation are under such intense scrutiny.

The deputies tasked with apprehending the girls just stood by and listened to the girls scream through their final moments. From Raw Story:

“In the video, Pinellas County deputies can be heard standing by their cruiser, with one officer yelling, ‘I hear them yelling, I think!’

‘They’re done. They are 6-7, dude,’ another officer replies.

‘They were yelling,’ another deputy responds. ‘I thought I heard yelling.’

As the car continued to sink the deputy replies, ‘But now, they’re done. They’re done.'”

No criminal charges have been filed against the negligent deputies.

While the three girls stole a car, and thus weren’t innocent by any stretch of the imagination, they did not deserve to die for it. If the officers had attempted to save the girls, that would be one thing and they would be free from scrutiny. Chalk it up to an unfortunate ending to a crime. But, because the negligent officers just stood around and listened to the girls scream themselves into a watery grave, something needs to be done.

Incidents like these do not help a profession that currently has a serious image problem. 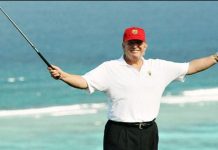