In 1875, President Grant dealt with the Whiskey Ring Scandal, where government officials were pocketing whiskey taxes illegally. He came under fire for trying to punish those involved while protecting his own secretary at the same time.

In 1972, five men broke into the DNC headquarters in the Watergate Hotel, and Nixon attempted to cover up the crime. He ended up resigning from office to avoid facing impeachment.

In 1998, President Clinton was impeached for an “improper physical relationship” with White House intern Monica Lewinsky. He was the second president in history to be impeached after Andrew Johnson.

We could keep going in both directions on the timeline (Abu Ghraib, Teapot Dome, Iran-Contra), but you’re probably wondering what the point is. David Brooks, a New York Times opinion writer described to be “center-right,” had an interesting observation to make regarding President Obama’s tenure in office last June by saying:

“The other thing though I did want to say, that there are people in American life to whom this has not happened. And, you know, I have my disagreements with, say, President Obama, but President Obama’s run an amazingly scandal-free administration. Not only he himself, but the people around him. He’s chosen people who have been pretty scandal-free.

Think about that for a moment. While the definition of “scandal” will vary wildly with a hard-right conservative than the rest of society, President Obama’s administration didn’t have a Watergate, a Whiskey Ring, an Abu Ghraib, or a Whitewater.

A year has passed since Brooks’ comment, and there still hasn’t been any massive wrongdoing on the part of the Obama administration. At best, there were made-up scandals with fake information presented just to make the administration look bad.

President Obama’s presidency has been a clean one, with a focus on issues and productivity that certainly wasn’t seen during the Bush Jr. years. However, Conservatives have continued to attack him in any way they can.

This is easily seen across the internet. Sadly, one Fox News article had to have the comments section shut down because of the barrage of disturbing racist comments fired at Obama’s daughter, Malia.

It must be so frustrating for those poor white supremacists. Seven years have passed since Obama first took office, and they’ve been salivating at the potential for a scandal. Searching for any information they can find, blowing anything they see as offensive to their racist worldviews out of proportion.

To their dismay, America’s first black president has run a rather clean administration. It’s all their worst fears come true.

Don’t worry, I’m sure that if Trump is elected, there will be more than enough scandals to sink your teeth into. 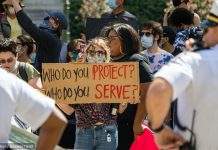