San Diego began a three-month campaign to combat human trafficking. Human trafficking is a brutal violation of human rights. Victims deserve both protection and resources. However, the San Diego District Attorney’s office is attempting to fight a crime they have neglected to properly define.

Billboards spread over the city read:

“Prostitution. There’s nothing victimless about it.”

The issue with this billboard is that the saying denies that anyone can choose prostitution. In every case, the words indicate that everyone involved in the sex trade is a victim.

"When it comes to #sexwork, the most important people to ask about it are sex workers". https://t.co/tseNcFLVms … #rightsnotrescue

The National Institute on Justice defines Human trafficking as:

“The United Nations defines human trafficking as the recruitment, transportation, transfer, harboring, or receipt of persons by improper means (such as force, abduction, fraud, or coercion) for an improper purpose including forced labor or sexual exploitation.”

What the San Diego campaign has done is conflate sex slavery with sex work. There is no comparison between being forced or coerced to engage in sexual activity and deciding to do so for money.

The county prosecutor stated that they began the campaign based on:

“A belief that members of the public would be willing to work against human trafficking in their communities if they had a better understanding of the conditions that drive children and adults into the sex trade.”

People of all ages are driven into the sex trade for various reasons. Some reasons include, but aren’t limited to, economic necessity and a lack of housing.

Criminalizing prostitution is akin to treating the symptoms of a problem.

Giving sex workers a record and or fines does not create an alternative to the circumstances that brought them to sex work. On the contrary, it makes it harder for them to leave.

"… so long as economic motivators exist, we cannot “stress” the sex industry out of existence." https://t.co/5FQLWUJLkS #rightsnotrescue

Of course, the campaign is supposed to be directed at saving victims of human trafficking. If the state recognizes these people as victims, why are victims ever subject to arrest?

“Decriminalizing juvenile prostitution is in neither the public’s nor victims’ interest and could make it more difficult to prosecute pimps because the minors would have no incentive to testify.”

Senate Bill 1322 which was recently proposed in California addresses this issue. The bill would make it illegal to prosecute minors in the sex trade. The bill recognizes the contradiction between calling minors engaged in prostitution victims while criminalizing them.

Human trafficking is a great thing for the city of San Diego to be tackling. However, coming down on human trafficking should not be used as a ploy to target adults willingly engaged in prostitution.

It pushes human trafficking further underground, making victims harder to find. Many victims remain afraid to seek help from law enforcement. This fear is sometimes justified as reports have found the biggest threat to children in the sex trade is the police.

Amnesty International, a leading human rights organization, is calling for the full decriminalization of sex work.

Amnesty reports protection from exploitation and coercion, the ability to report violence to the police, and housing and career discrimination as some of the reasons for their stance.

In response to the crusade to save trafficking victims, sex workers have coined the hashtag #rightsnotrescue. The premise is that people should be offered protection from human rights abuses.

Exploitation and rape should be criminalized, not sex work. 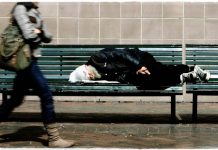 As Possible ICE Raids Loom Again, Here Are Your Rights