Republican presidential nominee Donald Trump is absolutely unfit to lead this country. He continues to spread his message of hate. The fact that this man is still in the race boggles my mind. He plays on people’s fears, and some people are buying it.

Here are some of the most disgusting memes that Trump supporters have posted online:

Please keep in mind that these memes are offensive, vile, and downright disgusting. Anyone viewing them should have a strong stomach, and parents are cautioned to supervise their children:

Someone close to me sent this to me personally. Choosing not to hate an entire religion doesn’t mean we are supporting terrorism. I’m an atheist, so I don’t agree with religion in general.

However, I don’t think 1.3 billion people need to be blamed for a handful of hateful people.

2. I Shouldn’t Be Surprised

♠Gray_is_good I have that liberal work ethic… I just sponge memes off others, same way you make a living #Trailer pic.twitter.com/XSZHxkmqNV

Earth to Republicans: We don’t like terrorism. All 1.3 billion Muslims are not out to kill us. Stop living your lives in fear!

They have been saying nasty things about the First Family for the last eight years.

5. We Are Not All Hippies

I wonder if this dreadlocks Lib knows she has become the poster child for all things liberal memes? #caring pic.twitter.com/0fcIxng9zP

Republican just seems to think we are all vegan hippies hugging trees. We are not all like this.

Republicans experience plenty of butthurt when anyone criticizes Donald Trump. Trump himself is afraid of debates, so he is the cry baby here – and this meme is the perfect representation of him.

Typical sexist crap, she’s a woman so we must talk about her looks.

They are posting flags mixing both the Democratic logo and religious Islamic symbols. Just because we don’t want to make millions of innocent people wear armbands and be forced to register in a database, doesn’t mean we like terrorism.

#TheBlazeSOTU
After 7 years these MEMEs explain the State of The Union and the State of the Democrat Party pic.twitter.com/SVorjZbscy

Republicans seem to have a few specific topics against Democrats that they just run into the ground.

That protest turned riot didn’t happen simply because they’re “liberals.” It’s like they think they are Rambo or something. This is not an action movie – get over yourselves.

Actually, that last one replaces a meme that was just too NSFW for this article. If you’d like to see it, you can do so here. Be warned however, it uses graphic language.

Here is an interesting video teaching some of the real differences between the parties: 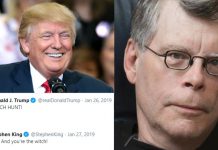