It should come as no surprise that the religious right was not too pleased with the Women’s March on Washington, and its sister marches around the nation. After all, they managed to convince most of their followers that such little things like respect for women don’t matter as much as ending abortion and rolling back marriage equality.

So when some three million people turned out around the country to protest Donald Trump’s misogyny, the fundies scrambled to explain it. To hear them talk, the only reason that many women could be out there was because of some sort of evil force. Well, it looks like the forces of evil were working overtime to bring all of those nasty women to Washington to protest against a man who thinks disrespecting women can be dismissed as locker room talk. To hear them talk, they were not only driven there by witchcraft, but by demons as well.

Jim Bakker devoted much of last week to discussing his trip to Washington for the inauguration with evangelist Billye Brim–best known as the longtime gal pal of Gloria Copeland, wife of prosperity gospel hawker Kenneth Copeland. People for the American Way’s Right Wing Watch got a clip.

On his January 30 show, Bakker claimed that Trump’s inauguration was literally saturated with “the presence of God.” He claimed that the presence of God was still there as early as the wee hours of the morning. That stood in marked contrast to the next morning, as the Women’s March ramped up. Bakker’s wife, Lori, said that the atmosphere in Washington changed almost overnight. Brim harrumphed that was because the women there had been “driven by demons.”

The next day, Bakker talked more about what he saw when the Women’s March came to town. When he went down to the lobby of his hotel, he claimed to have sensed “the most evil spirit I have ever felt”–a marked contrast to 24 hours earlier, when dozens of ministers had been on hand for the inauguration. He wrung his hands at how many women were there dressed in pink and wearing pussy hats. He claimed to have done some research and had an idea what it meant, but said he couldn’t tell his audience what it meant because “it’s dirty, it’s filthy dirty.”

Later in that show, Brim said that what happened at the Women’s March was evidence that “we need to take authority over the darkness.” She’s planning a conference focusing on the authority of the believer in Washington for later this year, but is searching for a venue. She had a message for her Washington-area followers–they needed to use their “habitational authority” to “control those demons that were in those women!”

Here’s a news flash, Jim and Billye. There were a good number of strong Christian women who were at those marches. Are you going to tell them that by standing up to Trump, they were letting demons control them? And are you willing to do so to their faces? If not, then you two need to apologize to every woman who was at that march. Otherwise, I can only assume that you are spewing this garbage only because you have bowed down to the Orange Calf.

I’d wondered how in the world the religious right could possibly stand by Trump even in the face of his debauched behavior. Well, now I have part of my answer. They think anyone who dared stand against him is only doing so because the forces of evil are making them do it. 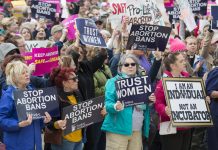