Shia Lebouf is in the news again this week, this time because his anti-Trump art exhibit has been shut down. The actor-turned-activist was recently arrested there after a tense conflict with a Trump supporter, and more confrontations have been reported since. The Museum of the Moving Image opted to drop the piece on Friday, noting that it was a threat to public safety.

The controversial exhibit was called ‘He Will Not Divide Us’, and featured a simple security camera on a white wall, with the title above it in black letters. Participants were asked to say the words into the camera, which was connected to a live stream.

The goal of the project was to promote unity and show courage in the face of adversity. Lebouf and fellow artists Luke Turner and Nastja Säde Rönkkö, all of whom make up LaBeouf, Rönkkö & Turner, collaborated on the project. They planned to keep it going for the next four years.

Museum officials explained their decision to shut down the exhibit, saying:

“The installation had become a flash point for violence and was disrupted from its original intent.”

While they had to take it down immediately, they still voiced support for the original idea:

“We are proud to have launched this engaging and thought-provoking digital art installation which was experienced by millions of online viewers worldwide. Until public safety concerns overrode the intent of the installation, HEWILLNOTDIVIDE.US generated an important conversation allowing interaction among people from many backgrounds and with different viewpoints.”

There is no video currently streaming on the exhibits website, but the artists have vowed to keep it going, stating:

“On February 10, 2017, the Museum of the Moving Image abandoned the project. The artists, however, have not.”

Perhaps Shia will find a new venue for his exhibit soon. Until then, the site’s live feed simply says, “THE MUSEUM HAS ABANDONED US.”

Check out Lebouf’s exhibit in this video taken before it was shut down: 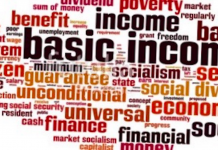