President Donald Trump is untrustworthy in the eyes of millions of Americans. His many lies since becoming president have been well-documented, and a good number of people are paying attention to them.

On at least one issue, we know that a majority of the citizenry doesn’t trust Trump at all: how to best deal with the threat of a nuclear-armed North Korea, which has launched a series of missiles indicating it is capable of reaching the United States itself.

According to an NPR/Ipsos poll conducted from September 11 to September 12, 51 percent of Americans do not trust Trump on to handle escalating tensions between the two nations. Of those who do not trust Trump to manage the situation, four-out-of-five say they “strongly disagree” with the idea that Trump is capable of easing the escalating rhetoric and talking back Pyongyang from continuing its nuclear program.

On the flip side, 44 percent of Americans are confident in Trump’s leadership on the issue. But only 22 percent “strongly agree” with the notion that Trump can handle it; the remaining 22 percent only “somewhat agree.”

The poll was conducted before North Korea launched its latest missile over Japan, an act that the United Nations Security Council condemned as “a threat…to all UN member states.”

For his own part, Trump attempted to step up his own rhetoric against North Korea, specifically calling out dictator Kim Jong-Un in the only way the president seems to know works for him: through name-calling.

It a tweet made early on Sunday morning, Trump explained how he spoke to President Moon Jae-in of South Korea about the North Korean leader, whom Trump referred to as “Rocket Man.”

I spoke with President Moon of South Korea last night. Asked him how Rocket Man is doing. Long gas lines forming in North Korea. Too bad!

Trump has previously used explosive rhetoric in the past when dealing with Pyongyang, including stating that the nation, if it continues its push toward arming nuclear missiles, “will be met with fire, fury and frankly power the likes of which this world has never seen before.” The statement led many to believe Trump was threatening annihilating the peninsular country with a nuclear strike.

The president has the sole authority to launch a nuclear weapon against any nation he perceives to be a threat. Of those polled by the NPR/Ipsos poll, three-quarters of respondents were not aware of that fact, with most believing that Trump would need approval from either Congress or his military leadership before ordering a launch.

Watch the video below to hear more about North Korea’s pledge to get a nuclear arsenal: 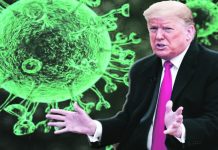