Remember the infamous Steele Dossier and its author former British spy Christopher Steele? Turns out he’s been friends with Ivanka Trump for years. Seriously, like 10 years. A decade.

In the Department of Justice Inspector General’s report that was released on Monday, the friendship is alluded to and shows that Steele was favorably disposed to Pres. Donald Trump and his family because of the relationship.

Let’s just pop this up here before we continue, eh?

Wow! FBI made 11 payments to Fake Dossier’s discredited author, Trump hater Christopher Steele. @OANN @JudicialWatch The Witch Hunt has been a total fraud on your President and the American people! It was brought to you by Dirty Cops, Crooked Hillary and the DNC.

ABC News has confirmed that Ivanka Trump and Steele met in 2007 at a dinner and they’ve corresponded ever since. Supposedly the “friendship” was continued as they discussed a possible working relationship.

"He described their relationship as 'personal' and said that he once gifted a family tartan from Scotland to the family member." That family member was identified as Ivanka.https://t.co/JxF63uhhEe

It’s been a bad news day for Trump and his conspiracy theorists since the IG report revealed that Steele was indeed NOT biased against Trump when he started the process of compiling opposition researched.

Breaking: Dossier author Chris Steele had a meeting at Trump Tower, and maintains he was not biased against President Trump and in fact maintained a close friendship with a family member and was, if anything, “favourably disposed” to the Trumps. Extract from the OIG report here: pic.twitter.com/afjxBkcTkd 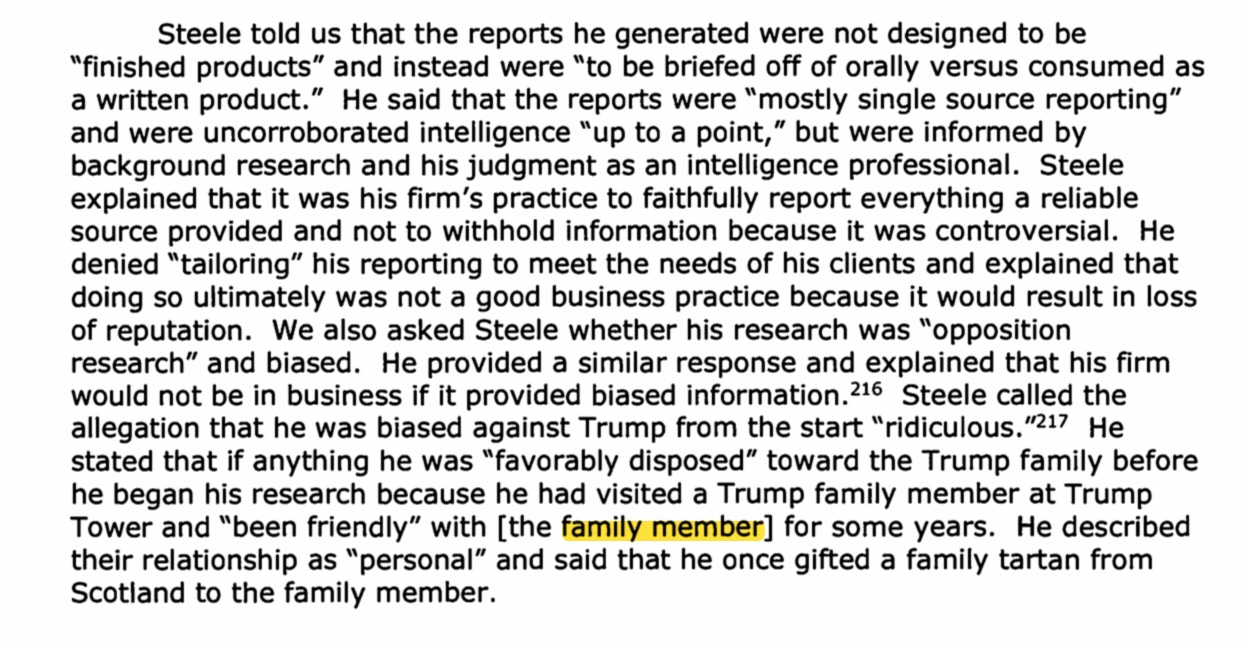 TwitterBut it gets better. Apparently Ivanka invited Steele to Trump Tower in 2010 after Steel went into private practice. Why, you ask? To offer him a job with the Trump Organization doing due diligence abroad as a part of the work he was doing for Orbis.

Trump has famously seethed about the Steele Dossier because it revealed that Trump has extensive Russian contacts and suggested that Trump might be compromised and blackmailed by the Kremlin.