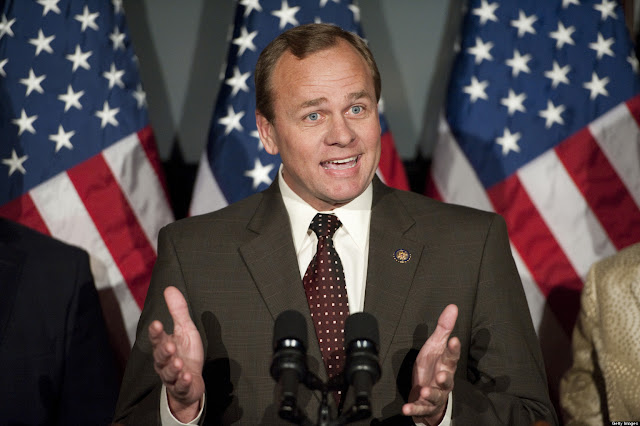 On Monday, I?wrote?about the incomparable Representative Stephen Fincher, a Republican congressman from Tennessee who is currently crusading against the monstrous injustice of providing poor people with food to eat through the SNAP program, better known as food stamps. What made Fincher’s assault on SNAP uniquely appalling was that the congressman has personally received nearly?$3.5 million?in federal farm subsidies since 1999 (his father and brother have also received millions). Fincher’s stunning pharisaicalness was then?covered?by?The?New York Times on Wednesday (the article appeared in Thursday’s print edition). It takes a special kind of depravity to accept $70,000 in direct payments from the federal government in 2012 alone ?and then go to the House floor and denounce the government’s refusal to allow poor people to starve to death.

Representative Fincher’s press secretary is a woman by the name of Elizabeth Lauten. Her Twitter handle is?DCGOPGirl. Serving as press secretary for someone who has recently been exposed as a moral cretin of the highest order must be a thankless task, and indeed, Lauten has been peppered with tweets over the last few days regarding her boss’s remarkable display of cruelty. On Wednesday, though, the same day?The?New York Times?published the online version of its piece on Fincher (for which a certain “spokeswoman” declined to comment), Ms. Lauten was tweeting away merrily, evidently unperturbed by the rapidly growing outrage over the good congressman’s flagrant hypocrisy. This particular series of tweets, though, actually left me floored: 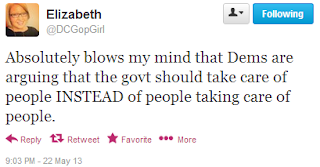 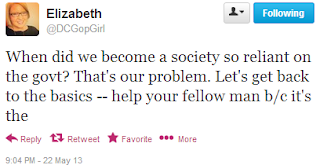 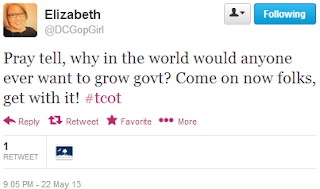 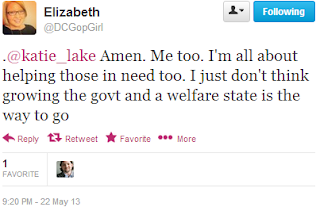 Please just let this soak in for a minute. This is the press secretary for a congressman who is taking heavy fire from all sides for accepting millions of dollars in federal subsidies over a period of thirteen years while, at the same time, asserting that government has no choice but to let poor people starve, lest Washington continue its unconscionable practice of “appropriating and spending other people’s money.” His philosophy is clear: the welfare state is noble and necessary when it benefits people like him, but represents the height of evil when it provides a hot meal for a single mother and her children. Unfortunately for Fincher, his views are now being covered and exposed by the national media, and more people are learning about his absolute moral bankruptcy.

Given this reality, one would assume that Ms. Lauten would strike an extraordinarily humble pose, if only for a few days as this storm passes. One would be wrong. Ms. Lauten admonishes us to help our fellow man privately, without involving the government, which is clearly not “the way to go.” She actually expresses befuddlement at the very notion of government welfare (it “blows her mind” that so many Democrats are inexplicably in favor of government helping people). What misguided forces could possibly be behind this welfare state of which you strange, confused people speak?

Maybe Ms. Lauten was going all meta on us, trolling her own boss, messing with his head. Maybe her account was hacked by someone with a profound appreciation for irony. But if not, it means that Fincher’s team has decided to deal with this controversy by explicitly acknowledging and owning their man’s hypocrisy, and straightforwardly asserting that welfare that goes to Fincher – and, presumably, other Real Americans like him – is appropriate and deserved, unlike that other wasteful spending, such as that which keeps poor children from starving to death. It’s actually a refreshing dose of honesty, no?