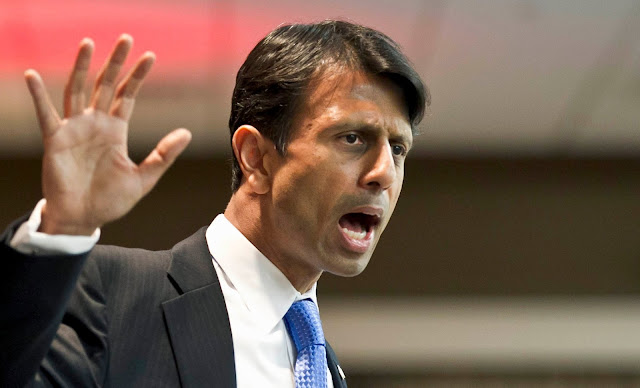 On Friday, Governor Bobby Jindal of Louisiana?published?an opinion column on CNN.com. The piece is a typically vacuous screed against some of the great forces of evil in American life: Obama, Big Government, and debt. Jindal obviously phoned it in, assuming he didn’t just have some intern type it up in twenty minutes.

One excerpt in particular, though, is fascinating:

These scandals were bound to happen. In fact, it was inevitable, and there will be more.?President Obama has grown?the size, the scope,?the debt?and the power of the federal government?to such irresponsible proportions that problems like these are an inevitable result. (emphasis mine)

The “scandals” to which Jindal refers are Benghazi/IRS/AP (someone should really come up with a clever name that combines all three). Notice that he included “the debt” in his list of causal mechanisms that led to all these dastardly scandals. Jindal is asserting that the federal debt actually played a role in the Obama administration’s handling of the Benghazi attack, the random IRS agents’ scrutinizing of ultra-right-wing groups, and the Justice Department seizing two months of AP phone records (Jindal seems to imply with his wording that the debt contributed to?all three?”scandals,” but at the very least, we can assume he thinks it contributed to at least one, although which one, exactly, will presumably never be specified).

This is a connection that is so utterly bizarre and nonsensical that I doubt it could ever arise in the most creative depths of Glenn Beck’s imagination. At least with Beckian Logic, while one understands that it’s quite obviously insane, it doesn’t usually present itself through entirely random non-sequiturs and alleged causal links that no one can even begin to comprehend. To claim that the size of the national debt played a direct role in the State Department’s response to an incidence of violence on the other side of the world, or in minute decisions regarding tax forms in a Cincinnati IRS office, is something that is beyond what one normally encounters in the world of ultra-right-wing lunacy.

What makes this so inexplicable is that Bobby Jindal is not Glenn Beck. Glenn Beck has no formal education beyond high school. He is clearly a stupid and confused man. Bobby Jindal, though, is not. It’s hard to survey Jindal’s background, even cursorily, and not be impressed. He graduated from Brown University at the age of 20 with degrees in biology and public policy. He made the?USA Today?All-Academic team, was accepted to both Harvard Medical School and Yale Law School, but decided to study at Oxford, where he earned a graduate degree in political science with an emphasis on health policy. At?24 years old, he was appointed Secretary of the Louisiana Department of Health and Hospitals, which represents 40% of the state’s budget and employs 12,000 people. At 28, he was appointed president of the University of Louisiana System, one of the nation’s largest systems of higher education. From there he worked in health policy for the Bush administration, got elected to the U.S. House of Representatives, and eventually became, at 36, the youngest governor in the United States.

The term “prodigy” exists to describe people like Bobby Jindal. Only the ideologically blind would deny the obvious intelligence at work here. What, then, explains Jindal’s wildly stupid pronouncements on so many areas of science and public policy? He doesn’t just shamelessly?flirt with creationism, like so many Republican politicians do: Jindal actually?signed a law?allowing creationism to be taught as science in Louisiana’s public schools. He doesn’t seem to know whether or not he “believes” in climate change, but he does?reject?”alarmism” and “doomsday” talk, and he opposes any meaningful action to address it. He apparently believes people can be demonically possessed and has?personally participated?in an exorcism. He’signed legislation?providing Louisiana’s judges with the option of sentencing sex offenders to forced chemical castration at the hands of the state. These are the positions of a raving lunatic – who just happens to be arguably the most accomplished scholar in American politics.

One obvious explanation is that it’s purely political. Jindal is a leader of a political party that revels in anti-intellectualism, he’s paranoid about coming off like some hyper-educated elitist, so he dumbs himself down. That doesn’t seem to suffice, though. This is not just some marginally intelligent Republican politician trying to curry a bit of favor with the knuckle-dragging, pre-Enlightenment base (see Rubio, Marco). This is a prodigy, a man of obvious intellect, who, for years now, has consistently claimed to hold positions that are objectively stupid and irrational. Has there ever, in the history of American politics, been a more profound disconnect between a politician’s intellectual background and his professed political positions? This is why the case of Jindal is so fascinating. It really has no parallel.

Jindal might have simply calculated that no one who presents himself as an intellectual can thrive in the modern Republican party. Or he might be uniquely susceptible to cognitive dissonance, allowing him to simultaneously achieve great distinction as a scientific scholar, while tacitly endorsing the notion that the earth is a few thousand years old. It’s impossible to know. But he’s not someone who can just be dismissed as a Republican loon. It’s worth considering what the curious story of Bobby Jindal’s political career tells us about the Republican party, Jindal himself, and the intellectual health of our politics.