Welcome to the Liberal Conservative’s look at the first ten amendments to the United States Constitution, better known as the Bill of Rights, part 4 of 10!

“The right of the people to be secure in their persons, houses, papers, and effects, against unreasonable searches and seizures, shall not be violated, and no warrants shall issue, but upon probable cause, supported by oath or affirmation, and particularly describing the place to be searched, and the persons or things to be seized.”

Ah, the 4th Amendment to the U.S. Constitution… This brings back fond memories of Law & Order; particularly Detective Lenny Briscoe. Many consider the 4th Amendment to be one of the most important pieces of legislation in our nation’s history and they could easily make a solid argument for it. This amendment protects the American people from having the police just up and bust through your door and take you to jail. Anybody who knows anything about law can tell you that this is yet another basic right in regard to a free state; a trend we’ve already seen emerge throughout the first three amendments.

Former President George W. Bush was obviously not a big fan of the 4th Amendment seeing as he was hugely influential in the passing of the Patriot Act. Amendments I, IV, and VI are absolutely obliterated by the Patriot Act in the face of the “terrorist threat.” Don’t get me wrong, I know that terrorism, as Americans define it, is very real. Though, I strongly believe that the odds of you or me dying in a terrorist attack are miniscule at best.

Now “H.R. 5122” really only refers to the first iteration of the act in 2006 for the 2007 fiscal year, but it kick started the entire she-bang; and, on the surface, the NDAA doesn’t seem like that big a deal. It allocates funding for all branches of the U.S. Military and other defense-type activities. A little deeper, though, and you’ll see that it does a bit more than that. It expanded the President’s right to declare martial law, courtesy of revisions to the Insurrection Act Of 1807, and allowed the President to take control of the state militia without the state governor’s consent in times of turmoil, where the state government cannot maintain order.

At first glance that seems reasonable. I mean, Hurricane Katrina; am I right? That does count as a condition wherein the state government cannot maintain order all by its lonesome. However, there is a problem. The U.S. Federal Government can pretty much take any situation where things are, even a little more rowdy than normal, and call it chaos.

Martial law is then declared to maintain “order”. That’s a scary amount of power for any U.S. President to wield, but at least George W. Bush was eventually booted out of office, courtesy of our trusty 22nd Amendment term limits. After Bush II, along came our good friend Barack Obama! He’ll institute change in this country!

Except he didn’t. In fact, he signed the FY2013 edition of the NDAA that included the Indefinite Detention Clause, after making a statement condemning such provisions. As George Carlin would say, “That’s what we call stunningly – and embarrassingly – full of (poo).”

But what’s so wrong with the IDC? Besides the fact that this new version of the bill kept Guantanamo Bay open after President Obama said he’d immediately shut it down as President. The IDC says that the U.S. has the power to detain U.S. citizens without probable cause and hold them indefinitely without so much as a warrant.

It isn’t often you’ll find this author agreeing with even a single word Senator Rand Paul (R-KY) ever says, but he’s absolutely right when he slams the NDAA for it’s violations of the 4th Amendment, along with others, including the 5th Amendment which I’ll speak about in tomorrow’s entry to this series.

So, could it be that President Barack Obama is, in fact, no better than any other politician currently working in Washington? Yup. That’s exactly what it means.

Thanks to the Patriot Act and National Defense Authorization Act, it really doesn’t anymore. When you have a law that openly contradicts and overrules a once rather significant piece of the Bill Of Rights, not to mention other pieces of the first ten amendments, then that “right” ceases to exist.

And somehow liberal Democrats have been brainwashed into believing that just because he’s a Democrat Barack Obama is somehow not as guilty as George W. Bush and the “Republicans” in regard to stomping on the U.S. Constitution. Hey, it isn’t as bad as the mind-numbing stupidity of the Tea Party, but it is blatant naivety.

I know I reference George Carlin quite a bit. He is, after all, my hero. Not just because he was funny, but because he was incredibly bright and philosophical even in the face of his fame and wealth. Therefore, I’ll mention him again.

Toward the end of his final HBO special, “It’s Bad For Ya,’“? George said that, “…rights aren’t rights if somebody can just take’em away”.

Instead, he called them “temporary privileges”. And I gotta’ say, folks, that as much it pains me to say it, George was right. So long as bills like the Patriot Act and NDAA exist and are continuously updated to include more and more exceptions to Constitutional Law, we don’t actually have any rights, only temporary privileges. It would seem that protection from unreasonable search and seizure, the 4th Amendment, has fallen victim to the American people’s willingness to trade a little bit of freedom for the vague specter of safety. 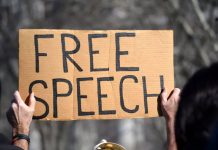