Today Russia blocked any pages having to do with Euromaidan on their version of Facebook, known as Vkontake. The reason isn’t to stifle the voices of Ukrainians using the social networking site to network and provide information, but to keep people from finding out the fact that Russians used the website to recruit Russians to go to Crimea and make it appear that many people living there wanted Russia to intervene militarily.

Several ads were posted on Vkontake a few days before Russia mobilized troops to Crimea asking for men between the ages of 18 to 45 with military experience to travel to Crimea under the pretext of tourism to help decide the fate of all Russian people. The ad also states that the more people willing to go to Crimea, the more reason Russia will have to intervene. The ad also stipulates not to pack any weapons, and they will be given further instructions once they arrive. 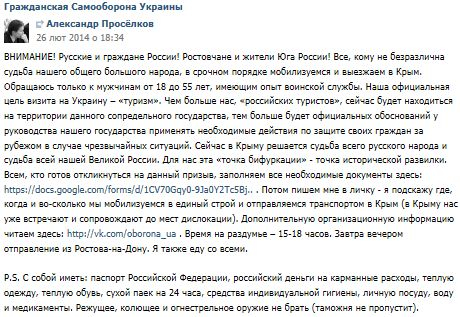 One Moscow resident answered the ad and traveled with a group of men to Kharkiv, Ukraine, where they participated in demonstrations to make it appear there was great support for Russian intervention. Here is the Moscow resident taking down the Ukrainian flag and hoisting a Russian flag in it’s place. 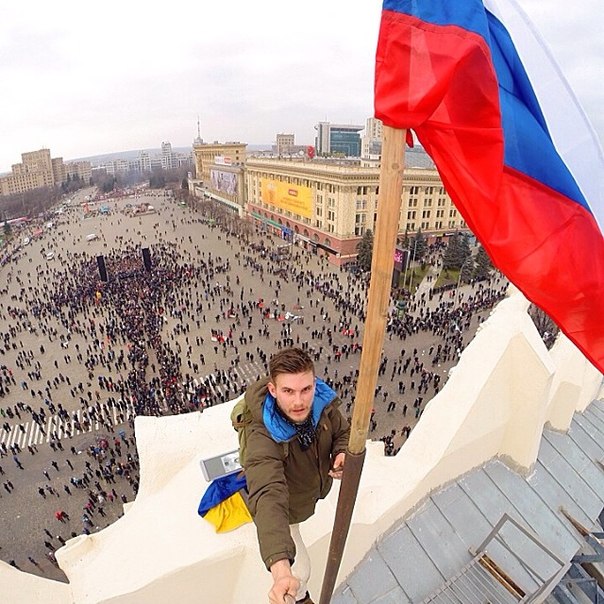 How do we know he’s from Moscow? Here’s a screen grab of his personal page on Vkontake:

Yes, it’s in Russian. This is the Russian knock-off of Facebook. If you look at the text to the right of our color guard’s picture, it lists his birthday, city and country. ‘??????’ is Russian for Moscow. In case you haven’t noticed, there is a thumbnail of the image of him raising that flag in Kharkiv.

Russia’s rationale for invading another nation is based on people like this man who traveled from Russia to Ukraine to make it appear as if Ukrainians living in Crimea wanted to be Russians instead, and wanted President Putin’s help. Now there are armed, unidentified military personnel guarding roads, TV stations, airports and border crossings throughout Crimea, and Putin has permission to send troops to help the people begging for Russian intervention. Wherever they may come from.

The American Political Prisoner the Media Should Be Talking About

The Letter ‘Z’ is Appearing All Over Russia. Here’s What It Likely Means