The London School of Economics (LSE) is the first academic center to address the brutality faced by women in war zones.?The LSE center on women, peace, and security was opened by Angelina Jolie, an international women’s rights campaigner and special envoy for the United Nations (UN) as a high commissioner for refugees. Students at the center have the chance to make a difference in the world. Angelina Jolie said,

?If you were to ask me who I think this centre is for, I picture someone who is not in this room today,…I think of a girl I met in Iraq three weeks ago. She is 13 years old, but instead of going to school, she sits on the floor in a makeshift tent…The girl was captured by Isis as a sex slave, and repeatedly raped, …Now she may never be able to complete her education, or get married or have a family, because in her society victims of rape are shunned, and considered shameful. To my mind, what we have begun today at LSE is for that Iraqi girl and others like her.?

A four-day summit was held last June, hosted by Jolie and William Hague, former secretary for the United Kingdom. The summit was part of the government’s Preventing Sexual Violence in Conflict initiative, and a protocol was signed by 151 countries. The LSE center on women, peace, and security is the latest step to help end rape as a weapon in war. Key thinkers, activists, policymakers and academics will gather together to discuss and attempt to find better solutions to global problems, which include prosecuting war zone rapists, and engaging women in politics. Hague, who witnessed sexual violence during his tenure as foreign secretary, described it as,

?…a major factor in perpetuating conflict and holding back development? he noted it was ?hardly talked about by foreign ministers or even considered a security issue? Crimes against women have been accorded a lesser priority throughout history,…Sexual violence in conflict involves the deliberate targeting of women and children and men, in ways that often simply defy the power of description.?

In conjunction with the center opening, Jolie made two short films, which are available exclusively online at The Guardian. The films tell the stories of women who have been hurt by Islamic State (ISIS). The shorts were filmed on a visit by Jolie to a Kurdish refugee camp in Dohuk, Iraq, which is home to 2.1 million Iraqis. They were forced to leave their homes in 2014 after ISIS invaded.

The first film features Sabreen and her sister Dilvian, who were held captive for four months by ISIS. Their father, along with rest of the men from the village, were killed. ISIS took all the women to Syria to be sold. The girls ended up in Raqqa, away from their mother, where Sabreen was tortured while Dilvian was forced to watch. Said Sabreen of the experience,

?For one hour a day they electrocuted me…They put electric cables to my head, my hands and my feet. I was crying and begging him to stop but he wouldn’t listen.?

In the second film, Jolie spoke with Amusha, a 58-year-old woman whose daughter was kidnapped by ISIS fighters. It is believed she was taken to Raqqa and sold as a slave. Speaking of the day they took her daughter, she said, ?…they [ISIS] brought buses and packed them with young, beautiful girls.”

When Angelina Jolie was asked why sexual violence has taken so long to come to the world’s attention, she responded,

?My emotional response is: I have no idea. I find it abhorrent and it makes absolutely no sense to me that we know that girls are being sold into sexual slavery; that when a woman is raped she is forced from her community; that girls as young as nine are being married off?I cannot fathom why it has taken so long. I cannot fathom why it has ever been alright to treat women this way.?

It will take a lot of work to end sexual violence, or violence of any kind towards women, but the center is a giant step towards working to end the violence. Through education and working together, we can help the victims heal and begin to build a new life; a life free of violence and away from the bloodshed. 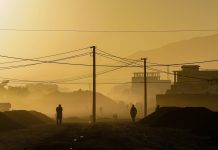