It’s a dream come true for some people. There have always been those that reject the complexity of things that they don’t understand. Sitting around poker tables, gathered in taverns or dressed in their best whilst engaging in dinner party banter, chubby little bar stool politicians have long opined on how easy it would be to fix societal ills.

Some succumbed to facile scapegoating, blaming immigrants, rock music, comic books or the differential between the knee line and the hem of a woman’s skirt. Others wove complex tales of economic wizardry pointing often, and loudly, toward days gone by. Oh, how they pined for their lost youth as if that alone would make for a successful policy stance.

Their one flaw was something of a fatal one. They had no idea what they were talking about.

The Ship Of State

Plato identified this very same problem over two thousand years ago. He described a ship of fools where navigation was decided via a show of hands as opposed to deference to any actual ability. The captain along with his sextant and other tools of navigation was thrown overboard leaving the ship in the command of a bunch of braggarts. By those who shouted the loudest, by the cunning and the manipulative and by those willing to cut greasy deals in the bowels of the ship.

The sailors, whipped into a frenzy of populist ignorance set sail for a new life dripping with fortune and glory.

Until the ship runs aground of course. Until it capsizes or is eaten by a giant squid or whatever the hell else happens when a ship with no captain is left to drift aimlessly across uncharted oceans with no hope of ever returning home.

And if any of this sounds familiar then it’s only because this is exactly what happened in 2016. Love, loathe or despise Hillary Clinton, few people would deny that she had the experience necessary to steer the ship of state. But the spoils of victory went instead to a loud-mouthed oaf who probably thinks a sextant is some kind of over-sized prophylactic.

And so, sails were reefed, decks were polished, and with little sense of trepidation the ship’s new master, President Donald Trump, gave the order to set sail for:

And off we sailed into a bold new future in which America would be ‘great,’ again. The ship creaked and groaned as it zig-zagged from one policy U-turn to another. Canvas once taut against the wind flapped listlessly in the warm zephyr of so much hot air.

And then slowly, as the days went by and the Horizon refused to yield to the land, some of the crew began to grumble. As if awaking from a bad dream some of them began to understand that they had been duped.

Their new captain didn’t know how to steer a ship. He couldn’t ban Muslims or bring back the jobs of moribund industries. He was all talk.

That realization must have hit them like a ton of yet to be built Mexican wall.

State Of The Ship

According to a recent article by Vox, the real problem stems from the fact that Trump, like most bar stool politicians, seemed to think that running a country was easy. They wrote:

“Trump’s basic worldview, as articulated on the campaign trail, was that all the major dilemmas of American public policy had easy solutions. The reason the problems had not been solved already was that America’s political leaders were too stupid, too corrupt, or too “politically correct” to solve them.”

The reality of the situation seemed to set in quite slowly.

After having failed to repeal and replace Obamacare with:

…As he had promised on the campaign trail Trump was forced to concede that:

“Nobody knew healthcare could be so complicated.”

Only, pretty much everybody knew that it was.

And his ignorance of such matters didn’t stop there. According to the Wall Street Journal, it took Chinese President Xi Jinping less than ten minutes to convince Trump that he knew absolutely nothing about North Korea.

Trump didn’t even deny that this was the case. He told the Journal that:

“After listening for 10 minutes, I realized it’s not so easy.I felt pretty strongly that they had a tremendous power [over] North Korea. … But it’s not what you would think.”

No, it’s not what you think Mr. President. Those of us who took the time to study the situation were well aware of its complexity.

Had he any understanding of geography, he would realize that the two Korean capitals are only 120 miles apart. He would have understood that Seoul itself is just 35 miles from the border.

Were Trump interested in details, he would understand that 13,000 artillery pieces are aimed at Seoul from that same border. And whilst many of these weapons are outmoded, they are still more than capable of flattening a city.

If Trump were in possession of the facts he’d be aware that China acts as a guarantee of North Korean sovereignty in much the same way that the U.S. defended West Berlin. And having realized that, he would understand that to attack North Korea would be to attack China itself.

And that would drag the U.S. into a costly, unwinnable war that could easily lead to WWIII.

Which is to ignore North Korea’s nuclear option entirely. If cornered they might decide to unleash a missile on Tokyo or even attempt to strike the U.S. itself. The satisfaction some might feel from wiping North Korea off the map in the inevitable retaliation would be short-lived. To the people of L.A or New York that would be something of an understatement.

A few thousand survivors would emerge from smoking ruins with some tough questions for Trump over his foreign policy decisions.

Wish Upon A Reality TV Star

The people wanted someone who wasn’t a politician. Somebody who had no experience of government. They asked for a person who held the political classes in utter contempt. Someone who lacked finesse and whose main qualification was a lack of qualifications.

Well, they got what they wanted.

A toddler has been given a wrench a sent below decks to fix the engine.

Good look on those high seas.

Even the Right are concerned with Trump’s lack of consistency 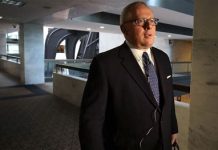