Without a doubt, the Donald Trump tailenders who are most deserving of being called deplorables are the bloggers and pseudo-journalists who seem to be looking for pedophiles under every rock. They devote most of their time to shining the hot lights on “Pizzagate,” a supposed pedophile ring based out of the Comet Ping Pong pizza restaurant in Washington which involves a number of prominent Democrats and pro-Democratic celebrities.

One of the most infamous members of that cabal is Liz Crokin, who seems to think that if you’re an outspoken critic of Trump, you’re either a pedophile yourself or you’re covering for pedophiles. She also believes the same people behind Pizzagate ordered a hit on Steve Scalise.

Well, Crokin may have finally carried this angle too far. She accused one of Hollywood’s most prominent couples, Chrissy Teigen and John Legend, of being pedophiles. Unfortunately for Crokin, Teigen and Legend aren’t taking this lying down. They’re threatening to haul Crokin into court.

On Saturday, Teigen noticed that Crokin had posted pictures of her daughter, Luna, dressed up in various costumes. Apparently Crokin saw this as evidence that Teigen and Legend were part and parcel of Pizzagate. Needless to say, Teigen was not happy.

Alright. I debated saying something about this but I’m pretty disturbed over here. The fact that there are people with these…thoughts…is really scary. pic.twitter.com/9OtWKHxUgR

…apparently dressing my daughter as Alice in Wonderland and a hot dog and having a pizza emoji on Snapchat has to do with pizzagate and being uhhhh darksided. Holy shit That thread is wild. Enjoy.

Yeah yeah it’s “just Twitter” but I’m pretty sure this *sick* person is saying we are darksided pizzagate pedophiles who traffic our daughter. Ummmmm this is really scary shit.

Almost as alarming to Teigen was Crokin’s potential audience.

50,000 followers. This is not okay. pic.twitter.com/AnQKO0behg

Thank you, Twitter, for verifying somebody who is esentially accusing me (with pictures of my daughter) of child abuse and pedophilia to their 50,000 followers.

Anyhow. I really am not enjoying that shit as the last thing on my timeline soooooooooo hello, normal people. Love you.

But if I dressed Luna up as Alice, wouldn’t I be on their side and “following the white rabbit”?? Why would I post it? What does a hot dog symbolize? Why would I willingly choose a pizza if I were in a secret pizza cult? Why am I trying to even make sense of this still please hel

Chrissy you run in circle with people who rape, torture & traffic kids. This is a fact, I expose sex trafficking for a living. https://t.co/xg3uefOWSv

I never said that, I simply made an observation. https://t.co/65gtAggTiz

What's not OK is trafficking kids as sex slaves which is rampant in Hollywood. Why don't you use your platform to educate people? https://t.co/KhUjd9L4L1

Bad move, Liz. REALLY bad move. Teigen demanded that Crokin back down, and back down immediately.

You need to apologize to me. Now. https://t.co/aH2urGzXcO

And she backed up her demand with a very loud hint that she was considering legal action.

Anyone know any good lawyers? https://t.co/220haIinni

She also reported Crokin’s deplorable smears to Twitter, who revoked Crokin’s status as a verified user.

That's OK cuz I care more about saving kids than I do about a blue checkmark!

Hmmm, sounds more like smearing innocent people with groundless accusations to me. It’s long past time someone stood up to sleazeballs like Crokin. Teigen is apparently of the same mind.

1000 people will tell you not to give them attention, to ignore it, who cares they’re crazy, etc. Don’t ignore it. Tired of letting these people get away with this shit. Thank you, @twitter.

Legend got in on the act as well, backing up his wife’s threat to haul Crokin into court.

You need to take my family’s name out of your mouth before you get sued. https://t.co/bPTwiBAs97

When a since-banned deplorable tried to chime in, Legend shut him down.

Y’all almost got someone killed with your Pizzagate bullshit. Stop now. You’re not saving anyone from anything. https://t.co/lGVKzTHBVr

In case you missed it, in December 2016 a guy from North Carolina traveled to Comet Ping Poing to “self-investigate” Pizzagate. He wound up firing three shots from his AR-15 clone, but they didn’t hit anything. The so-called hero pleaded guilty in March and is serving four years in prison.

For those wondering what the heck the fuss was about, Legend decided to give his followers a crash course.

He shared a thread that explained what Pizzagate was–and why it’s complete BS.

Later, Teigen warned Crokin that she had pissed off one person too many.

@lizcrokin you lead people to believe WE were endangering our child. Trafficking OUR child. You posted photos OF MY child. don’t backtrack now and say we “run with” pedophiles. I am taking this FAR, Liz. Your shit ends here.

She then tried to be philosophical about the events of the last few hours.

It is INCREDIBLY weird to be two (semi) normal, ridiculously boring human beings who literally make food, watch tv and clean up dog barf in any kind of off time and then be suddenly accused of being in Hollywood’s hottest pedo ring. What a year what a year, 2017.

With that, I will be done and let these people further incriminate themselves.

As if on cue, Crokin decided to try a new tack.

That's the conclusion you came to. Many in Hollywood are victims & as far as I know you could be a victim. If that's the case, I'm sorry.

YOU POSTED MY DAUGHTER AND HAVE 50,000 PEOPLE ACCUSING ME OF BEING IN A PEDO RING. I don’t care HOW you backtrack or WHAT you deleted. I have it ALL. I’m the last person you are fucking with. You are DONE with me and my family. You are going to court.

You have been fucking with too many people for too fucking long with NO regard for your words and NO consequences. I’m the LAST. It’s OVER.

Chelsea Clinton, among others, tweeted her sympathies to Teigen.

Chrissy, sending you & beautiful Luna a huge hug. It is awful & never ok when people threaten or demean any child. I’ve lost count of the Twitter accounts who’ve threatened Charlotte with #FGM. While I never bother to report threats against me, I now report every one against her.

On the face of it, Teigen and Legend could really draw blood. In order to prevail in a libel suit against Crokin, Teigen and Legend would have to prove that Crokin accused them of being pedophiles while knowing that accusation was false or with reckless disregard for whether it was true or false. Crokin’s smears appear to be the definition of reckless disregard for the truth.

Such a lawsuit would be long overdue. Crokin has been smearing people for too long, and people like her deserve to be sued into poverty. Go get ’em, Chrissy and John. 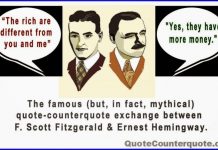