Are you also aware of the ensuing riots ecstatic Eagles fans engaged in in downtown Philly?

They weren’t as televised as the protests in Baltimore after Freddie Gray’s police-custody death in 2015, or the protests after vigilante George Zimmerman shot unarmed Trayvon Martin in 2012.

Police were prepared, though. They even smeared Crisco on lampposts to prevent revelers from climbing them. (It didn’t work.)

There were three arrests, some injuries, and obligatory vandalism and looting.

They were so destructive, emergency responders had trouble keeping pace with them.

“Still going strong in the [Office of Emergency Management]. But, if everyone could go home that would be great. We have to get some rest to start planning a parade in the morning.”

That’s why some are regarding the Philadelphia police department’s response as tepid in light of the situation. Some are even speaking out about the apparent racial bias in city officials’ double standard.

“Revelers reportedly ripped down light posts, caused entire structures to collapse and damaged vehicles and store buildings as they celebrated the Eagles’ 41-33 victory. But officials appeared slow to condemn the destruction caused by rioters, offering seemingly gentle requests for everyone to ‘go home.’”

“Black people getting tear-gassed on the front lines for justice, but white men get blatant passes to destroy property because #Philly won the damn #SuperBowl. America has always celebrated violent White masculinity while condemning civil Black free speech. We are seeing it now.”

“Somehow, it seems there’s a line drawn in the sand where destruction of property because of a sports victory is okay and acceptable in America. However, if you have people who are fighting for their most basic human right, the right to live, they will be condemned. You can riot if you’re white and your team wins, but if you’re black and being killed, you can’t speak out.”

BLM Philly said in a statement:

“It is nothing new to us that hordes of predominantly white fans setting fires, flipping over cars, and destroying property are viewed as ‘rowdy’ and engaged by police in a non-threatening manner, while crowds of predominantly black and brown people blocking traffic, or even holding candle light vigils to protest state violence against black and brown people are met with scores of hostile police and viewed as ‘violent.'”

“As football fans riot, I am reminded that, in response to the unjust deaths of young Black men like Trayvon Martin (who would have been 23 today), rioting is considered an affront to humanity. Not endorsing violence. Endorsing honest examination of WHY and eradication of racism.”

Athletes peacefully kneeling during the National Anthem to protest police violence against unarmed Black men and women gets frenzied tweets from Donald Trump and a line in his State of the Union Address.

But white football fans destroying the “City of Brotherly Love” gets meek requests to stop and go home.

And nothing in the mainstream media.

If the rioters had been Black, do you think we’d have heard more about it? 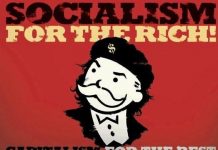