I never thought I’d be writing satire. I don’t like satire. It confuses me. But wait…this isn’t satire. It’s true. Our idiotic president is really freaking out about how many times people are flushing toilets.

Last Friday during a meeting with small business owners at the White House, Pres. Donald Trump went on a rant (and yes, it’s on video) talking about sinks, showers, and toilets. Trump claimed that people are flushing “10 times, 15 times, as opposed to once” and argued that people are unable to wash their hands because of the water shortage that’s being caused by people flushing the toilet too much.

Again, this is not satire. Moving forward.

“We have a situation where we’re looking very strongly at sinks and showers and other elements of bathrooms where you turn the faucet on — and in areas where there’s [sic] tremendous amounts of water, where the water rushes out to sea because you could never handle it, and you don’t get any water,” the President said during a roundtable with small business leaders about deregulatory actions.

“You turn on the faucet and you don’t get any water. They take a shower and water comes dripping out. Just dripping out, very quietly dripping out,” the President continued, lowering his voice as he spoke about the drips. “People are flushing toilets 10 times, 15 times, as opposed to once.”

What exactly was this buffoon talking about? No one really knows. However, it appears to have something to do with bathroom fixtures with low-flow appliances. You know, the new efficient toilets that use less water to flush.

But it doesn’t just stop with Trump’s apparent inability to rush his royal turds. He said the Environmental Protection Agency (EPA) is looking into it because he asked them to.

“They end up using more water. So (the) EPA is looking at that very strongly at my suggestion,” Trump said.

He didn’t share details as to what his suggestions were (if this is even true…who knows with this liar).

Then he started talking about something he does know about: washing his hands. Trump is famously a germophobe and hates shaking hands because of it.

“You go into a new building or a new house or a new home and they have standards only you don’t get water. You can’t wash your hands practically, there’s so little water comes out of the faucet. And the end result is you leave the faucet on and it takes you much longer to wash your hands,” Trump said.

And there’s this thing called “rain” that comes down. Yeah, he really said all this. Have I mentioned that this is NOT satire?

“There may be some areas where we’ll go the other route — desert areas — but for the most part you have many states where they have so much water — it comes down, it’s called rain. They don’t know what to do with it,” to laughs from around the table. “So we’re going to be looking at opening up that I believe. And we’re looking at changing the standards very soon.”

No one is really clear on what specific standards Trump is referring to or what can be done to change them. The EPA already has in place a voluntary program—WaterSense—for labeling efficient fixtures like showerheads. This program helps some with water conservation. There’s also a program that was implemented through the Energy Department that regulates showerhead pressure. 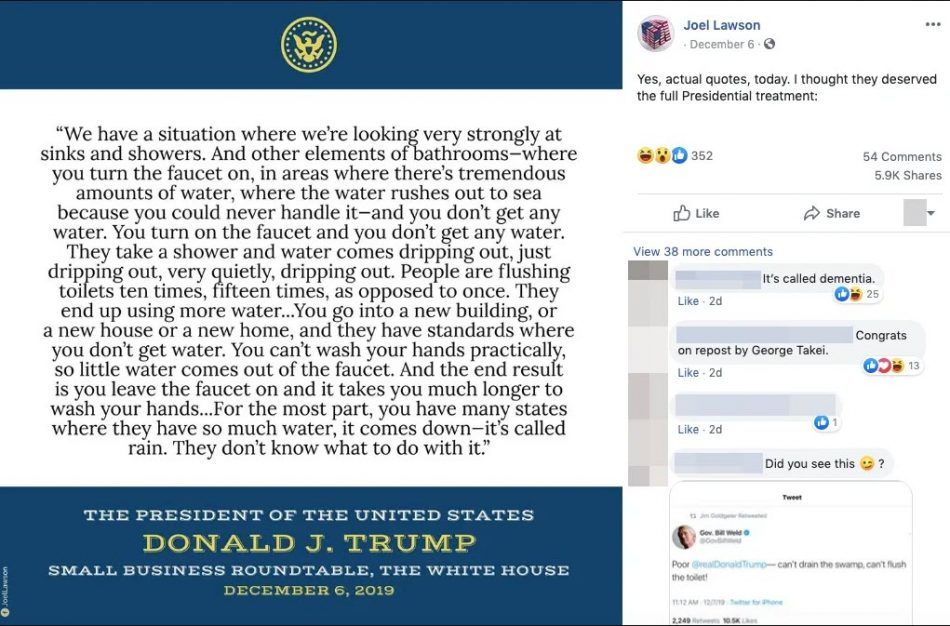 Of course, since President Bozo has said all of this, the EPA has been forced to issue a response.

“EPA is working with all federal partners including Department of Energy to review the implementation of the Federal Energy Management Plan and how it’s relevant programs interact with it to ensure American consumers have more choice when purchasing water products,” EPA spokesman Michael Abboud told CNN.

Keep in mind that Trump also has some concerns about light bulbs, although he doesn’t like energy-efficient bulbs. He says that don’t “make you look good.”

OK, who volunteers to tell him that he has an orange look all on his own, no light bulbs needed?

Mother Jones reports that Trump’s rant about toilets and showers is actually an old Libertarian hobbyhorse. In 1998, libertarian icon John Stossel criticized regulations that limit the amount of water per flush after interviewing unhappy toilet pressure enthusiasts. These folks traveled to junkyards and even to Canada to try to find old school toilets that have a powerful 3.5-5-gallon flush.

“Frankly, the toilets don’t work in my house. And I blame you, and people like you who want to tell me what I can install in my house, what I can do.”

Feel like you need to laugh about this lunacy to keep from crying? Check out Jimmy Kimmel’s monologue.