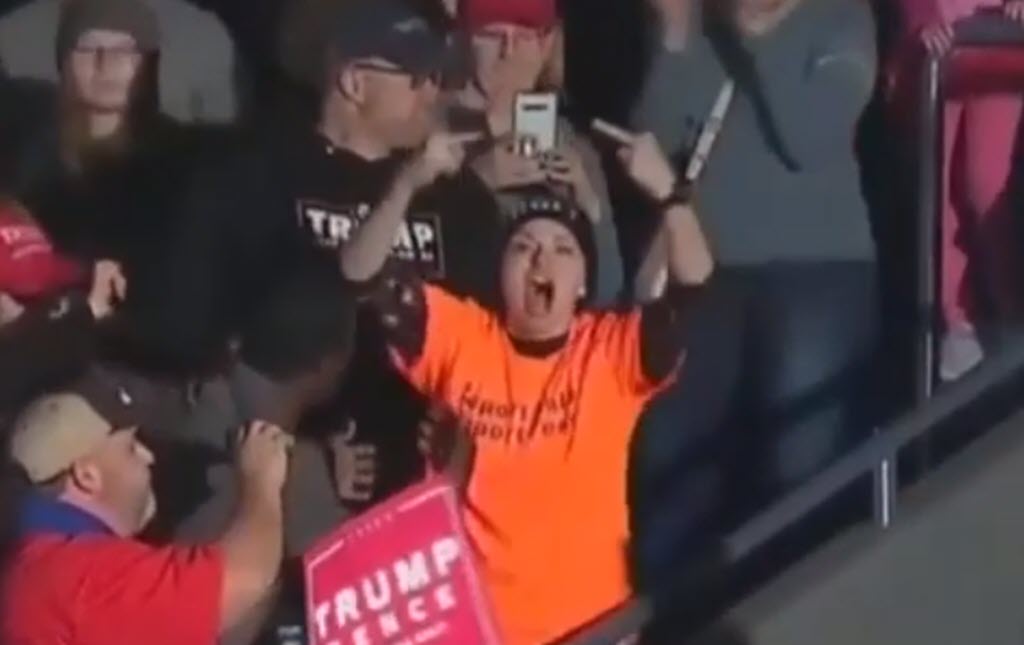 While Pres. Donald Trump was being impeached Wednesday evening, he was at a rally in Michigan touting his many accomplishments and how loved and adored he is. However, one rallygoer wasn’t quite as charmed by the president as his sheep-like supporters are.

When a protester started getting boos from the audience, Trump’s attention was suddenly captured as he realized what was going on. Footage captured at the rally shows a woman blatantly and gloriously flipping Trump the bird as she’s quietly ushered out of the rally by security guards.

First of all, Trump was furious that there was someone in the crowd who didn’t worship and adore him.

“There’s a real slob,” Trump said to wild cheers from the crowd. “Wait a minute. She’ll get hell when she gets back home with mom. … She screams a little bit, and you know what I like to do to avoid them,” he continued.

“Because I’ll tell you the big problem. I could hardly hear her. What happens is all of you people go crazy. ‘Look, look, look.’ … So there’s one disgusting person who made — wait, wait — who, I wouldn’t say this, but who made a horrible gesture with the wrong finger, right?” he continued. “Now, they won’t say that, the fake news media. They won’t say it. If one of us did that it would be like the biggest story ever.”

However, then his attention turned to the security guards who were escorting the woman out of the rally.

“This is one person who made a horrible gesture only because the security man let her have so much time,” he began to say. “And usually, I have to say, the police do an incredible job. Incredible. They do it so quickly.”

“And I’ll tell you another thing,” he went on. “I don’t know who the security company is, but the police came up, but they want to be so politically correct. So they don’t grab her wrist lightly. Get her out! They say, ‘Oh, will you please come? Please come with me. Sir. Ma’am. Will you — and then she gives the guy the finger. Oh. Oh. You gotta get a little bit stronger than that, folks.”

OK, so security or police are supposed to use force even if force isn’t needed? This woman was doing what they asked her to do. So what if she was giving Trump the finger as she did it. There was no reason for police to get rough with her.

“See, these guys want to be so politically correct. Get her out,” Trump said then. “See that. I’ll tell you, law enforcement is so great.”

Trump seems to really hate political correctness. I’d like to make a suggestion to him: perhaps if he were just a LITTLE more politically correct, he’d not be hated by so many people in this country, including the people who just impeached him.