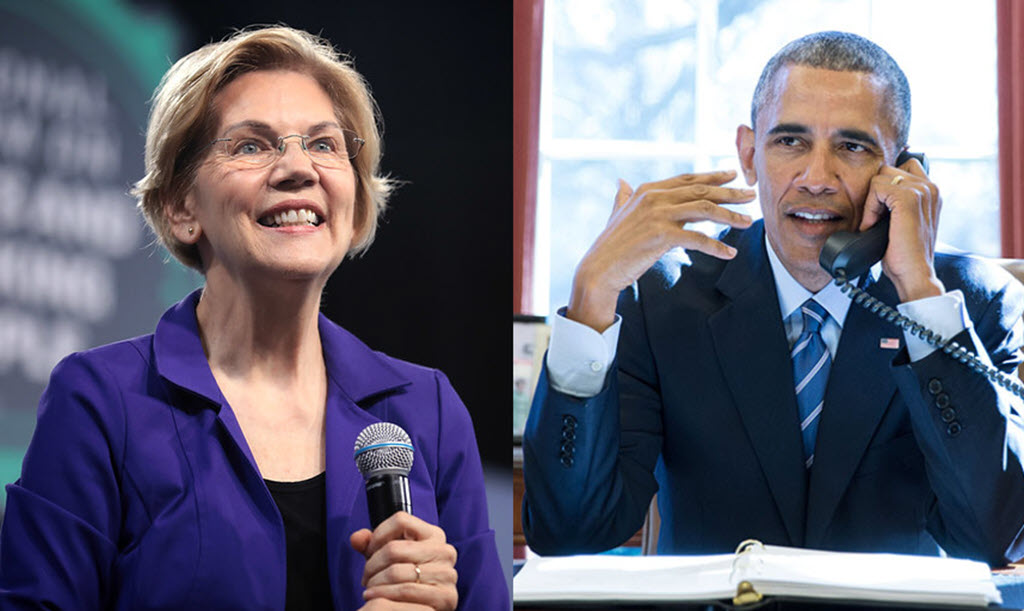 Although Sen. Warren has spent much of her campaign railing against the wealthiest Americans, Obama is convinced she needs them, even though she says she doesn’t want their help. She has even refused large checks from Democratic bundlers and sworn off high-dollar fundraisers.

However, that hasn’t stopped Pres. Obama from advocating on her behalf behind the scenes when he’s talking to donors who are irritated with Warren because of her hits against the wealthy and Wall Street.

In fact, Obama has told them that they must throw their support behind her, according to The Hill. Although he’s stopped short of endorsing her (he’s not endorsing anyone), he’s vouched for her credentials when talking to wealthy Democrats, and he’s made it clear that he considers her to be a capable candidate and potential president.

“He obviously thinks she’s very smart,” one Democratic donor added. “He thinks her policy ideas matter. And I think he sees her running the campaign with the most depth.”

Another donor also suggested that Obama “appreciates her intellect and is impressed by the campaign she’s run.”

“If anything, she has the most substantive achievements from his time in the White House,” one former Obama aide said. “And he’s someone who can talk at length about her accolades.”

To be clear, Obama has said he won’t make an endorsement in the 2020 Democratic primary.

“Look, we have a field that is very accomplished, very serious and passionate and smart people who have a history of public service, and whoever emerges from the primary process, I will work my tail off to make sure that they are the next president,” the former president said in a question-and-answer session at a Democracy Alliance event in Washington.

He has a message to all of the Democratic candidates who have sought his advice.

“He’s asked all of the candidates who have sought his advice three questions: Is your family behind you? Why you? And why now? She checked the box for all,” said one longtime Obama ally.

“I think he feels licensed to give an opinion on her because he’s ‘hired’ her,” the longtime Obama ally said.

Also notable is that recently Obama expressed a preference for female leaders, calling them “indisputably better” than men.

“I’m absolutely confident that for two years if every nation on earth was run by women, you would see a significant improvement across the board on just about everything … living standards and outcomes,” Obama said according, to the BBC.

He even went as far as to point out men.

Is this some shade being cast towards Biden? At the most recent debate, Biden claimed that Obama wasn’t talking about him.

Anyhow, this could be huge for Elizabeth Warren because unfortunately, the Good Old Boy System is already hard at work for Biden, who has received support from former Sec. of State John Kerry and former Treasury Sec. Jack Lew.