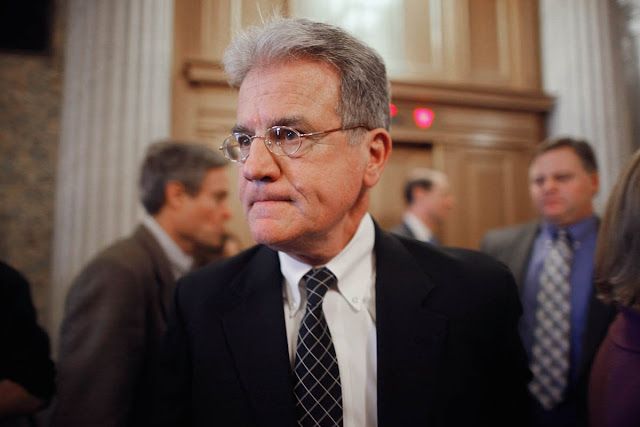 The gruesome Senator Tom Coburn, who supports executing “abortionists,” didn’t even bother waiting until all the bodies were recovered before making sure everyone knew that he was not going to support providing federal aid to tornado victims in Oklahoma unless it was offset by cuts somewhere else in the budget.

So-called “moderates,” and even “liberals,” have always had a disturbing respect for Coburn. Barack Obama and Coburn are notoriously good friends; here is the president showering Coburn with praise earlier this year after the latter’s ludicrous inclusion in Time Magazine’s “100 Most Influential People in the World” list:

The people of Oklahoma are lucky to have someone like Tom representing them in Washington ? someone who speaks his mind, sticks to his principles and is committed to the people he was elected to serve.

Liberal policy wonks like Ezra Klein consider Coburn a “serious” ideas guy. Last year, Klein indulged Coburn’s ridiculous delusions about an allegedly imminent “debt bomb” by sitting down for a long interview with him, which included pretending that Coburn was something more than a run-of-the-mill reactionary out to demolish the safety net. Klein openly gets “excited” when he has a chance to talk to this wise old policy sage.

This is lunacy. Tom Coburn is a fanatic who has made a career out of blocking anything that remotely resembles social progress. It takes a special kind of person to witness the horrors that took place in Oklahoma yesterday and immediately declare that the richest country in the history of the world will, unfortunately, not be able to provide aid to the victims, unless other spending cuts are found. Especially when said person is a senator representing the State of Oklahoma!

The reason Coburn is probably the most dangerous man in the Senate is precisely because, for reasons beyond my comprehension, liberals and moderates seem to view him as an honest broker, someone who is sincerely interested in good governance. But there is no evidence for this. Coburn’s entire career has been spent standing in the way of policies that might improve people’s lives. He proudly voted against the Sandy relief package. He is a religious fundamentalist who supports abstinence as the only true defense against HIV/AIDS and crusades against providing adequate funding for scientific research. He has a unique hatred of gays and once warned that Oklahoma was being threatened by an epidemic of lesbian debauchery. He is virtually obsessed with cutting vital social programs and making people suffer, all, ostensibly, in the name of staving off the debt crisis that exists only in his imagination.

President Obama said that “the people of Oklahoma” are “lucky” to have his “friend,” Tom Coburn, representing them. Well, yesterday’s victims happen to be “people of Oklahoma,” and they desperately need help, but their “principled” senator is ready, willing, and able to block it, probably with pleasure. Are they feeling “lucky” now?