Lately, it seems that a disturbing element on the right has been far too willing to throw basic decency out the window. For instance, Breitbart News openly admitted that it took part in a disgraceful effort to shame and smear Roy Moore’s accusers despite having reason to believe that at least one of them might have been telling the truth. And Sandy Rios somehow still has a job at American Family Radio after declaring that women who say they have been abused shouldn’t be believed.

Well, on Tuesday, we saw a rare moment of basic decency on the right-wing fringe. A notorious fake news peddler got booted from this weekend’s Conservative Political Action Conference after he spent the last week smearing the kids who survived a mass shooting at a Florida high school.

Long before “fake news” was even a term, Gateway Pundit had established itself as one of the most notorious purveyors of fake news on the Internet. Its owner, Jim Hoft, is notorious for merely regurgitating posts from Free Republic, or dreck that his fans send him, with virtually no vetting. It’s a big reason why he has been called “the dumbest man on the Internet.” And yet, despite this, Gateway Pundit was rewarded with a White House press credential.

But this week, Hoft crossed the line from dumb to outright evil. He and his fellow deplorables at Gateway Pundit jumped headlong into the far-right campaign to smear the survivors of last week’s shooting at Marjory Stoneman Douglas High School in Parkland, Florida.

Tonight I'll be joining the @HagmannReport to discuss the latest on the Russian witch hunt and media hoax along with updates from the #FakeNews media on the Florida shooting. I hope you can join us at 8:00 PM Eastern

One of their targets is senior David Hogg, one of many students who have made the rounds on national television to demand that state and federal leaders do something to prevent gun violence.

Earlier this week, Gateway Pundit’s so-called White House correspondent, Lucian Wintrich, wrote an outrageous hit piece suggesting that Hogg was an FBI shill. The FBI has been under fire after word got out that a tip about gunman Nikolas Cruz wasn’t properly passed down the chain. To Wintrich, the fact that Hogg’s dad is a retired FBI agent is a “red flag.” Additionally, Wintrich claimed that Hogg’s difficulty in answering questions suggested that he was “merely reading a script.” It led Wintrich to conclude that Hogg was being used as a tool to “curb YOUR constitutional rights and increase their power.”

Later, Gateway Pundit’s Kristinn Taylor went after Hogg and three of his classmates for–horrors!–smiling in a promo picture for an interview on “CBS This Morning.” You’ll have to take my word for it, folks–I’m not linking to either one of them.

Not surprisingly, Gateway Pundit has been kicked up, down, and sideways for this. And apparently there have already been repercussions. Hoft was slated to join another far-right luminary, Pamela Geller, CPAC for a breakout session on free speech on social media. But while speaking on Wednesday’s edition of “Breitbart News Daily,” Geller announced that she’d scrapped the panel rather than bow to demands that Hoft be booted off. Listen here.

Geller, best known for her rabid Islamophobia, told host Alex Marlow that on Tuesday night, she’d gotten an ultimatum–drop Hoft immediately for what APP called “reprehensible” and “intolerable” attacks on the Douglas survivors. Under the circumstances, Geller felt she had “no choice” but to scrub the panel altogether.

Geller claimed that it was clear that the survivors were being “coached” by CNN; she mused that they would not even be allowed on the air if they were calling for armed guards. She believed that while victims are off-limits, the survivors are being “used” in a way that amounts to child abuse–and Hoft was merely calling them out. Marlow was equally dumbfounded, saying it was “way over the top” to kick Hoft out at “the 11th hour.”

So there you have it. Geller and Marlow have no problem with a guy attacking innocent kids for speaking out. Would they be of the same mind if their kids were the targets? What Hoft is peddling amounts to libel. Indeed, as I noted on Daily Kos, I hope that Hoft and the other bastards peddling this garbage get sued for it–and taken to the cleaners. CPAC and APP would have been irresponsible at best to let Hoft have a platform after he spewed such libelous garbage.

It’s hard to give CPAC and APP much credit. The panel was also slated to include James O’Keefe of Project Veritas. You may know that O’Keefe sent in one of his minions, Jaime Phillips, to plant bogus accusations about Moore in The Washington Post. Fortunately, The Post didn’t take the bait. Incredibly, O’Keefe did so despite believing the accusers were credible. Trashing mass shooting survivors bad, victim-shaming good? 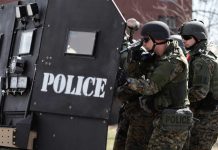