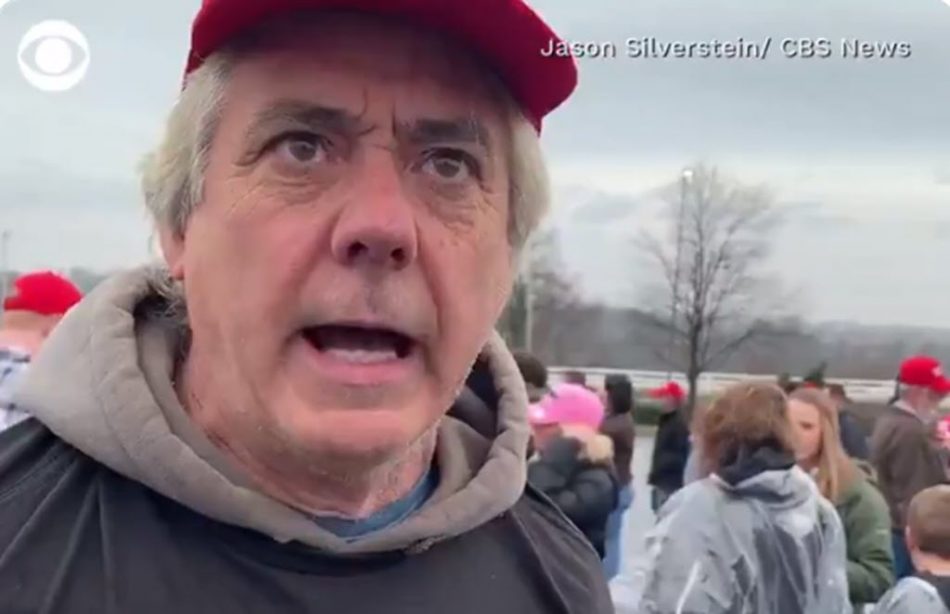 A video taken by CBS at Trump’s Hershey, Pennsylvania rally on Tuesday shows a group of angry Trump supporters saying that there will be violence if the Senate attempts to remove Pres. Donald Trump in the trial that’s will follow Trump’s impeachment in the House. In fact, one man even said he’ll take up arms (against who?) if anyone tries to force Trump to leave office. Another man said that the violence that would take place would be amount to a “second Civil War.” A Black man said that. Yes, really.

Trump supporters at the president's rally in Hershey, Pennsylvania tell CBS News their thoughts on impeachment and the possibility of his removal: "It would become the second Civil War." https://t.co/jPUmfWREbX pic.twitter.com/bzT0v9oaWN

The man who threatened with his .357 Magnum was particularly cheery (kidding, he was totally the opposite of cheery). Notably, he repeated three times in an angry voice “He’s not gonna be removed.” Dude seriously looked like the top of his head was going to come off from high blood pressure. Jason Silverstein, the reporter, asked him if he is confident of Trump’s job security.

Then, the Black man who invoked the 2nd Civil War was wearing a Trump 2020 cowboy hat. He said that we can expect “physical violence.”

“I think it would become a second Civil War,” he warned.

“We have families torn apart — including my family,” he continued. “My daughters are liberal, I’m conservative. Now that this whole thing has been going on, we just had a problem at Thanksgiving. Very unfortunate.”

A third man interviewed in the group of angry Trump supporters said that there will be a lot of “mad Americans.”

“There would be a strong movement. It would be very negative, possible violence,” in response to the same question about Trump’s removal. “Not that I’m condoning violence,” the Trump fan added, “There’ll be a lot of mad Americans, possibly 70, 80,000 — 70, 80 million Americans on the loose, not very happy.”

First, I’d like to inform him that fully HALF of America (or more) would be delighted. Oh, and also, Trump only got about 63 million votes in the 2016 election, losing the popular vote to Hillary Clinton.

“I really don’t agree with it,” she added. “I mean, he’s like the best president. It’s not gonna work out,” she added.

Similarly, another woman doesn’t see any evidence that her president has done anything wrong.

“Did he do something wrong? It doesn’t appear to me that he did. But I think it’s going to be very hard for people to change anyone’s mind,” she said, adding: “As a Trump supporter, I believe in him.”

There’s nothing classier than a bunch of angry Trump supporters. If they’re so confident in their president, why are they so angry? Also, dude with the gun? Bring it, bro. Dare you.